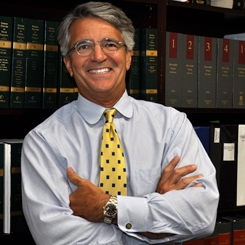 Paul practiced law in Raleigh for over 35 years. He began his career as a general practitioner before concentrating on the areas currently served by the firm. Paul particularly enjoyed assisting clients with business and commercial real estate purchase and sale transactions as well as estate planning. Paul represented a variety of businesses, but in the latter part of his career honed his focus on the representation of closely-held Anheuser-Busch wholesalers and their endeavors to expand their respective businesses through numerous mergers and acquisitions. Paul was equally proud of his commercial real estate engagements that included representation and personal involvement with developers of shopping centers, marinas, office complexes, condominiums, and open lands. During his career, Paul authored continuing education materials on probate law in North Carolina and 1031 like-kind exchanges and spoke frequently on these topics.

Paul was licensed to practice in the States of North Carolina and Georgia and was an active member of the North Carolina Bar Association and its sections on Tax Law, Business Law, Real Property Law and Estate Planning and Fiduciary Law. During his career, Paul achieved an AV rating from Martindale-Hubbell, recognizing him among his peers as “preeminent” in his fields of law.